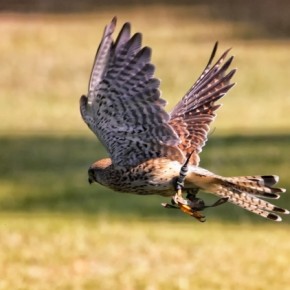 The Kestrel (photo by deoroller)

I came across this beautiful poem about the Kestrel, which is a small falcon only a little bigger than a Robin. It’s distinctly colorful and when it hunts, it “hovers” in the currents of the wind.

It was written by Gerard Hopkins and published in 1918. He admires this remarkable bird of prey alluding that it controls the wind as a man might control a horse. The kestrel then suddenly swoops downwards and “rebuffs the big wind”.

I caught this morning morning’s minion, kingdom of daylight’s dauphin,
dapple-drawn Falcon, in his riding
Of the rolling level underneath him steady air, and striding
High there, how he rung upon the rein of a wimpling wing
In his ecstasy! Then off, off forth on swing,
As a skate’s heel sweeps smooth on a bow-bend; the hurl and gliding
Rebuffed the big wind. My heart in hiding
Stirred for a bird–the achieve of, the mastery of the thing!

Brute beauty and valor and act, oh, air, pride, plume, here
Buckle! And the fire that breaks from thee then, a billion
Times told lovelier, more dangerous, O my chevalier!

No wonder of it; sheer plod makes plow down sillion
Shine, and blue-bleak embers, ah my dear,
Fall, gall themselves, and gash gold-vermillion.

Now that you’ve felt his immense delight for this bird’s prowess and design, watch this video of the kestrel floating on the currents of the wind with its eye to the ground for a tasty morsel.

I loved how Hopkin’s described the Kestrel as “daylight’s dauphin, dapple-drawn Falcon.” You can see in this video the beautiful dapple coloring in its wings. The Kestrel is also known as the “Windhover” as it requires a slight headwind in order to hover.