When I hear my husband’s falconry tales, I listen in amazement and wonder how I’m going to explain the next adventure to my readers. I have to admit that his take on the story is usually a short, to the point, ex-New Yorker recap of the situation. However, knowing him as I do, there is so much color, drama and adventure between the lines that I just have to write about it!

Hailing from the Bronx and surrounding areas, he grew up with fine-tuned street smarts and survival instincts that many a hunter would envy. Maybe he’s not an expert yet at the greener sports, but he’s got that 6th sense that will serve him well in any situation.

One thing about falconry that everyone should know is that a hawk is not a pet. It’s a wild animal that can be dangerous if not handled appropriately and safety has to be number one not only for you, but for your bird. That being said, when confronted with a wild hawk on the loose, this short story should give you confidence (as long as you have fresh meat on hand – and it isn’t you).

As you can see in the image below, there are three mews connected to the barn by an inner doorway, one on the left, center and right and each one is designed to house one hawk. What you can’t see is that connecting the three (on the inside) is a third room that unites each section and acts as a safety area in case one of the hawks was to escape. 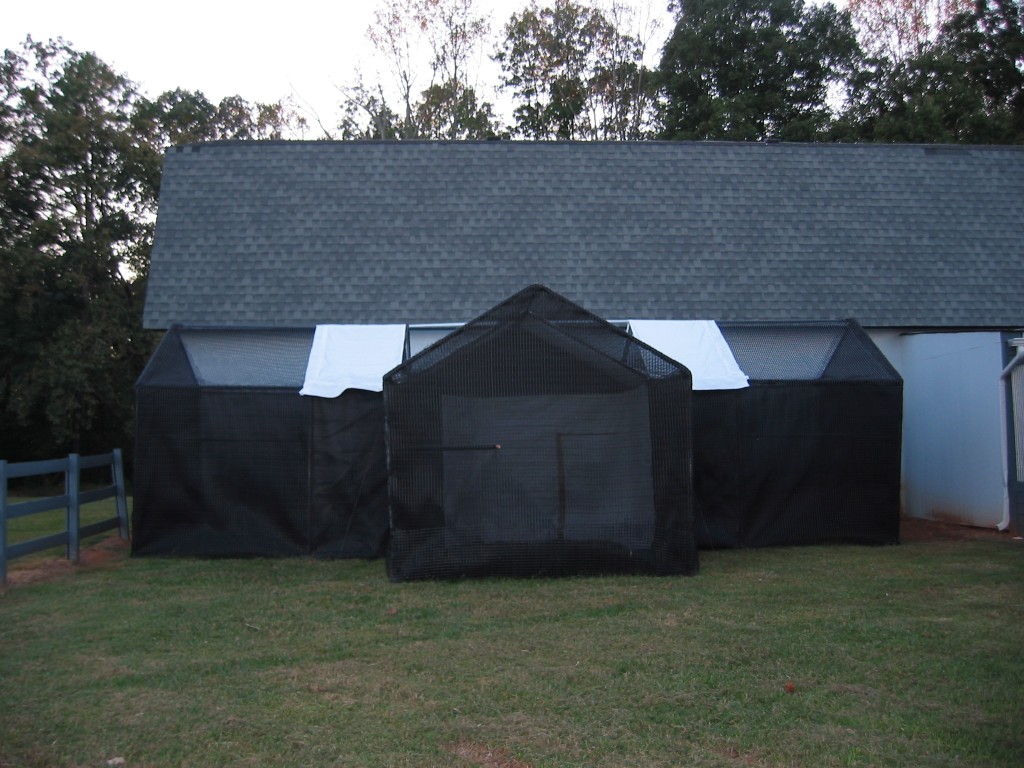 My husband’s hawk, Gracie, is in the center mews (if you look closely, you can see two perches through the mesh wall). The left mews houses Scout, our cousin’s hawk and the right mews is currently empty.

The other day, my H decided to feed Gracie from the lure in her mews. He was wearing his falconry vest and had the lure and food in his back pocket. As he was about to open the door to her mews, he sensed something behind him (yep, anti-attacker-stalker-mugger-smarts). As he turned to look back, he saw a hawk coming out of the doorway of the unoccupied mews and into the “escape” room towards him. This was one of those moments when “act first, ask questions later” was the wisest choice (and besides, hawks can’t talk). Out came the lure from his pocket along with its bounty in order to distract the hawk from attacking the food which was located near my husband’s _ _ _ (rhymes with bass). Luckily, it ended up being Scout who had just escaped from his mews. He ate the food, hopped up on my husband’s glove and was quickly returned to his perch.

Although street smarts is mostly applied to the urban setting, I think there is a place for it in the outdoors .  Perhaps it is otherwise known as common sense (as usually it’s knowledge that isn’t learned through study of theoretical material). It seems that survival in any setting would involve an understanding of how to function properly in your environment.