I dropped my husband off at the mews yesterday. It was lunchtime, a typical day and nothing unusual was in the wind. I walked into the barn with him and then into the mews while he was deciding whether or not to fly her.  Gracie was sitting on her perch, as usual, however he noticed that one of her jesses was missing.

Jesses (singular “jess”) are thin straps, traditionally made from leather, used to tether a hawk or falcon in falconry. They allow a falconer to keep control of a bird while it is on the glove or in training, and allow a bird to be secured on a perch outside of its aviary. – Wikipedia

My H looked all over the mews and a few minutes later finally found it stuck in the top corner of the roof of the enclosure. It was a mystery as to how it got there, but one thing was for sure – she was evidently having a bad day and quite short tempered (throwing a fit and stomping)! 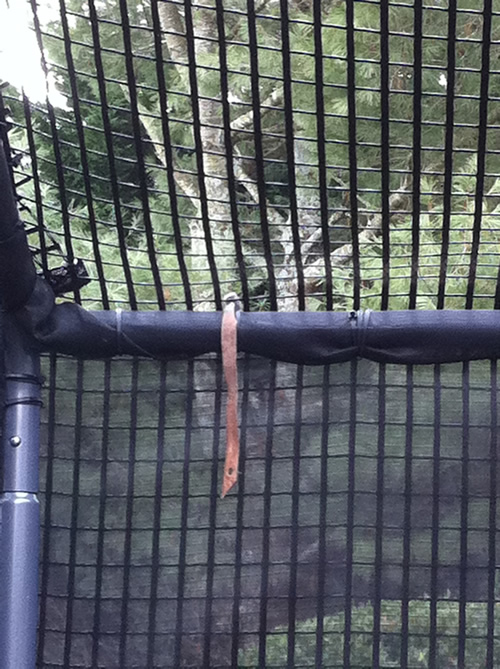 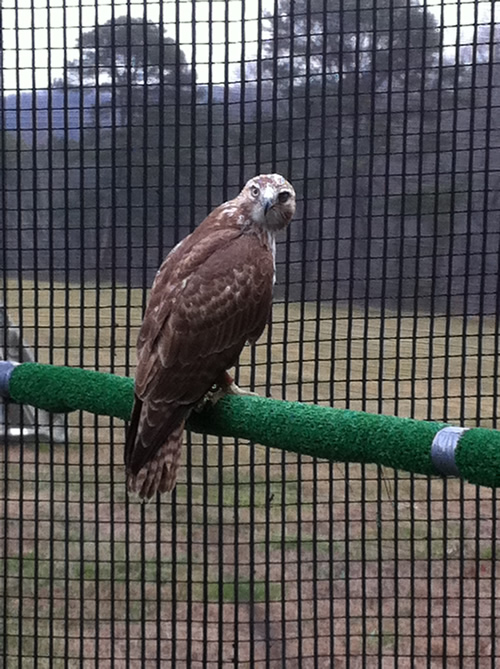 We have no idea how the jess ended up where it did (speculation is that she flew up into the corner and it got caught as her tail feathers were a bit damaged), but at this point, I left and went home to make lunch and let the dogs out. While I was gone, more adventures ensued.  My hubs decided to take Gracie out to fly her.  Now, there are actually 5 mews attached to our family’s barn and a Red-tailed hawk in four of them.  On the way back from their outing as they approached the barn, she flew up to a tree, then to the roof of the barn and then spotted her target which unfortunately wasn’t a squirrel, but was Scout, our cousin’s hawk sitting in his mews.  She pounced down to attack him, but was stopped short by the mesh roof.  He flew up to her in defense, but neither could get at eachother. I think she was planning on taking him out of the picture all together. Luckily, she was easily distracted and responded to a lure call from my H, losing interest in her next door neighbor.

These birds are very territorial, and defend territories that range in size from 0.85 to 3.9 square kilometers, depending on the amount of food, perches, and nest sites in the territory. The female is usually the more aggressive partner around the nest itself, whereas the male more aggressively defends the territory boundaries. The birds will soar over their territory, mostly on clear days, looking for intruders.  – (Preston and Beane, 1993)